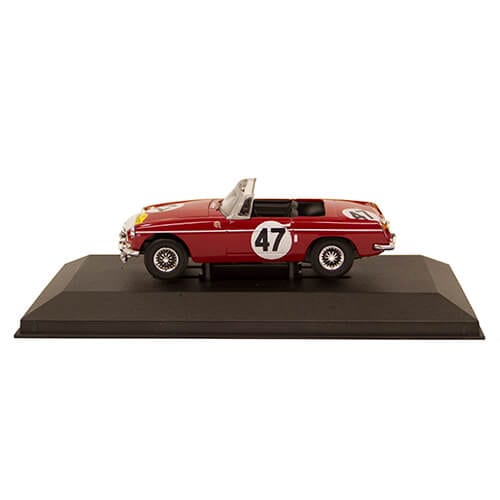 After the Spa-Sofia-Liege rally ended in 1964 due to safety concerns about racing on public roads the event moved to the Nürburgring. The resulting non-stop 84-hour regularity rally was perfect for the robust reliable MGB; meticulously prepared by BMC’s Abingdon-based Competitions Department. Two MGBs entered and both crashed badly on the same corner in the opening laps, their drivers caught out by loose-chippings. However, both were nursed to the pits where the ingenuity of Den Green’s team of mechanics got them back on track. The more exotic cars gradually failed, leaving the metronomic MGs first and second at 72 hours. The Poole/Enever car broke a halfshaft in hour-79 but GRX 307D continued to victory.

This high-spot in the MGB’s competition career was achieved partly because of the type’s benign handling and innate reliability; the winner completed 5,620 miles at an average speed of 66mph. However, careful planning from team manager Peter Browning was also important. He reasoned that in a 3½ day non-stop event, where just 2 drivers were allowed, tiredness would be a factor so instigated long 7.5-hour driving ‘stints’ and borrowed Moulton bicycles so drivers cycled back to their hotel, thereby getting some exercise, had a proper meal and got some quality rest. Browning’s drivers were initially resistant to his plan but, after 3 days racing, it proved wise as various more powerful rivals, running shorter stints, were eliminated in accidents caused by driver exhaustion.