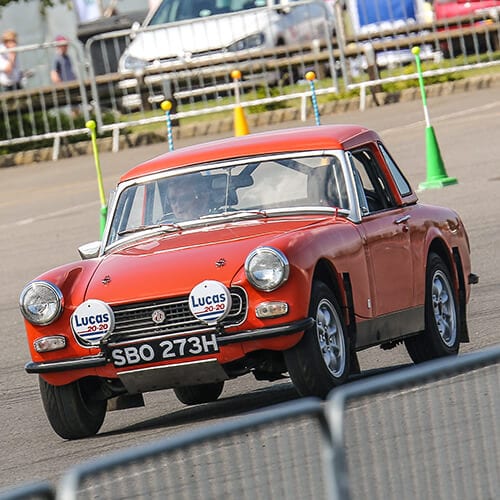 The MGLive! Autosolo will take place on the Sunday morning (14th June) in the centre of the event, and is completely free to enter! The event is open to members of the MG Car Club and invited Clubs. All vehicles must have been driven to the event.

The Autosolo comprises a number of All-Forward test layouts, offering maximum driver engagement and FUN, with the option to have a navigator on board. This is not a team event so ideal for the individual to compete for awards, in a test of car control and pace to complete the courses in the quickest “clean” times.

It is open to all MGs and marque-related cars, so anything from a Mini to an MG3!

Optionally, one nominated passenger may be carried on the timed tests to assist in giving directions to the driver, once the test has started.

Please see below for more details.

Add this product to your basket and we’ll send you the regulations and entry form as soon as they are available.

If you want to know more about participating in an Autosolo, Ian Webb’s excellent article below, re-printed from the MG Car Club’s Safety Fast! magazine should explain all that is involved.

I have been competing in something called Autosolos for two years now, some members know about them but it seems that many members have heard of them but don’t really know what they consist of, so I have been volunteered to explain. i do feel that Autosolos are quite suitable events for the large variety of cars and ages of cars we have within the MGCC,  many members are like myself; we want to have fun with a competitive edge but without danger of damaging the car, sprinting and hillclimbing are bit to serious and autotesting is just plain awkward and requires a lot of practice to become even reasonably proficient, autosolos can be done ONLY in a road car so your every day car is ideal, regular competitors win the national championship in their own every day car, you just add some free air into your tyres and off you go.

Firstly, let me say what it is NOT. It is not a sprint, and it is not an Autotest (though for MSA purposes it runs under an Autotest permit). In the USA it is also known as Autocross, but it’s nothing like our Autocross. Another name for the sport in the States is Slalom, and that begins to give a flavour of what it’s all about.  SOLO as it was first known here made it’s UK debut in the hands of Bristol Motor Club in May 2002,  it was well received, and its popularity has been growing steadily ever since. In this country it has now become known as Autosolo.

An Autosolo event has a series of short timed courses, run on a hard surface measuring a maximum of 200m by 200m. Most courses are a decent size and by nature never tight, so therefore are very suitable for saloon cars and / or the more mature car with a large lock. This really is a great way to enjoy whatever car you have – from a vintage car to a nippy hot-hatch The routes are made as clear as possible so you can concentrate on achieving your best time, rather than being a test of memory. A bit like an autotest/slalom course there are a series of gates to get through in as short a time as possible. The emphasis is on the driver rather than speed or power. The event is only open to road-legal cars that are taxed, insured and MOTd . All cars competing in an Autosolo must be driven to the event, so no Autotest specials here, also no special sticky road tyres or competition tyres are permitted. For insurance reasons you need to produce your club membership card, but neither a competition – nor even an RTA – licence is required.

Usually there is one test area, which will have a change of cones during the day to enable the organisers to create different test layouts, typically four or six test during the day depending on the size of entry. Each test will be approximately 1/3 to 1/2 of a mile long, with a duration of 60 to 90 seconds. All tests will be forwards only, no stop start or reversing with a flying finish before a final stop astride line where you must stop to collect your marked time card. Generally you will be given three runs at each test with the fastest two runs to count towards the results. There is NO practising allowed, this is an MSA rule. The test routes are marked by cones with numbered marker posts, which you pass in ascending or descending order. We also use horizontal cones usually bright-yellow (see attached photo) to point the way round; the intention being to make the event a test of driving skill rather than of memory. You will incur penalties if you go the wrong route or hit the markers, but the main aim is to complete the test course smoothly and quickly – times will be recorded by hand-held stopwatch. In their respective groups (not classes) drivers will complete three runs at each course, before a change of marshals takes place.

By keeping top speeds within reasonable bounds, (normally only first & second gears) we avoid the need for rescue units and medical crews, which helps keep the overall cost low, entry fees are £15 – £35  usually dependant only on venue costs. The discipline is also very economical with officials. Why? Because all of the competitors marshal the course themselves. This is achieved by dividing competitors into three groups. At any one time, one group will be competing on the course, one group will resting and preparing to marshal, whilst the third is actually marshalling the course . When the first group have had their three runs, it’s ‘all change’. You have to marshal the course for your timed runs to count.  It means that everyone has an equal amount of work and play, also while marshalling you get to chat with a mixed group of your fellow competitors more so than on some other events. This competitor marshalling element is for me a key difference between Auotosolo and similar other events, although it is not strictly speaking an MSA requirement, it is customary throughout the country.

Your car should not need too much special preparation, beyond basic safety checks, removing loose objects in the car or boot, ensuring the battery is secure, that both battery terminals are insulated from potential contact with the bodywork and that the earth lead is clearly identified (if it isn’t please mark it with yellow tape). If your car is fitted with hub caps or clip on wheel trims ensure that they are removed for the duration of the tests. If the conditions are dry you may find an extra 5 to 15 psi of tyre pressure will reduce tyre flexing and sharpen up the steering response, older cars on taller tyres seem to benefit more from this rather than modern cars on low profile tyres. You only need enough fuel for doing approximately five miles on the course, so rather than have a full tank of petrol which might slop out if over full, and give you a weight disadvantage, aim to come with about half a tank, well at least enough to get you round without fuel surge causing fuel starvation. You will wear out your tyres faster than normal, especially maybe the front tyres as that is usually the only part of the car that is worked hard on Autosolos, and the driver of course!

Outside of the MGCC events are run by the BTRDA and other individual motor clubs all over the country as part of regional and national championships, generally these are full of more modern cars as you would expect, but most events include a pre 1980 class which is very suitable for MGBs and Midgets, who can easily mix it right in with all the moderns, MGFs and modern Zeds are very useable but not in the historics class of course. You might be surprised by the variety of cars that are used and are competitive for overall results, the last event that I entered in October 2011 had twenty five distinctly different models of car, that event was won by a Lotus Elise but a Suburu Impreza was only one second behind him and Peugeot 106 two more seconds down; I think you would agree that’s a variety of closely competitive cars (actually the Impreza usually wins but the Elise was having a good day). Club Triumph always have a good number of competitors out on Autosolos so we have to get out there and show them the way home, I am trying, so come and help me out! To enter events outside the MGCC it might be necessary to join another Motor Club, my own recommendation is that if you need to join a Motor Club don’t worry too much about it being local but be sure to join one that is part of a bigger Motor Sports Group something like the Cotswold Motor Sports Group or the Mercian Motor Sport Group and there must be others around the country that I haven’t heard of yet (see t’internet). I enter usually with my membership of the Historic Rally Car Register which means I can to events all round the country for one membership fee. Or persuade your MGCC centre to join a Group as they are basically a club for clubs.

Personally I see that Autosolos are really catching on, and are more than worthy of inclusion in the calendar of the MGCC, they can be closed to club and with a simple class structure. Everybody will have a competitive yet enjoyable day out, better still the small organising team required does not need not worry about finding marshals …..competitors pay to do that !

If you can drive, and you have a car and you like a bit of friendly fun on four wheels, it’s hard to think of any reason why you shouldn’t take part!